TEN FILMS THAT MADE ME WANT TO BE A FILMMAKER Today is my birthday, and as birthdays go, I’ve been doing a fair bit of of reflecting on my life, my career, and my hopes for the future.  While I’ve found that there are in fact MANY rewards for getting older, my favorite is that I’ve gained some valuable insight into the moments that have helped shaped me into the person I am today.  I’ve always been a guy who loves a great story, and more than anything, my idols are those incredible storytellers that have whisked me away to faraway lands, filled my mind with indelible images, my heart with wondrous emotions, and left my view of the world forever changed.  These are the people that have inspired me to tell my own stories, and to pursue as many mediums, tools, and techniques possible to translate the stories I see in my head into something tangible for others to see.

Of all the arts, Film has by far been my single largest influence.  Film is a medium that connects with me on nearly every level, tying my passions for clever wordplay, impassioned performance, dramatic design, and exuberant music into a wondrously shiny bow that I just can’t stop staring at.  And of the many incredible films I have been lucky enough to see, there is a select group that have inspired me to further explore my own views of the magical, mystical, fantastical, and humorous arenas of our existence.

Many of these films have connected with me in ways that are truly indefinable.  And miraculously, through this indefinable connection, I have discovered a remarkable kinship with others like me, enlightening me to a very important fact – Being a fan knits you together with those like-minded individuals for all of your life.  (There are few things more delightful than mentioning a film’s title and finding an instant connection with others in a room, where all involved recognize each other as kindred souls.)

So, as part of my annual reflections, it occurred to me that I owe a debt of gratitude to the films and filmmakers who have helped pave my way into the craft.  Now, to be fair, this list is far from complete, but each of these ten films has in some way influenced the manner in which I translate my personal stories to the screen.  As such, I humbly thank each and every one of the filmmakers who contributed to the making of these films, applaud them for their dogged pursuit of your craft, and hope these films will continue to inspire others as much as they have inspired me!

A SHOT IN THE DARK (1964) – This is a movie I saw far after its initial release, but Oh Man!  How I laughed when I finally got the chance.  Hard to know which gag’s my favorite… from the stellar unfolding of indiscretions in the opening sequence, to the nudist colony-plus-guitar bit, to the hilarious drunken Clousseau, Kato, and Elke Sommers “Menage a Trois”, this film is both a goldmine, and a national treasure. (Thank you Blake Edwards and Peter Sellers for among many things, making bumbling so cool.)

THE ROCKY HORROR PICTURE SHOW (1975) – Although initially released in 1975, I knew nothing about this film until the weekend after receiving my driver’s license in ‘86, after which I ended up seeing Rocky Horror every Saturday night at Midnight till I hit college, and even after for a few years. Time Warp is one of the few songs that can cause me to stop and dance no matter where I am, or what I am doing.  (Thank you to Jim Sharman, Richard O’Brien, and Tim Curry for inducting me into world class camp, and introducing me to “garter belts”… Hotcha.)

MURDER BY DEATH (1975) – Sure, not everyone agrees with me on this, but IMHO, this is one of the funniest movies of all time.  Truthfully, I still don’t completely “get” the “fake maid in the suitcase” bit, but it doesn’t matter, because Neil Simon is a freakin’ genius. (So, Thank You Neil! ‘Nuff said.)

CLOSE ENCOUNTERS OF THE THIRD KIND (1977) – My folks took me to see this film at a drive-in in downstate Illinois.  (Oh, how I miss drive-ins…) This amazing film, while supposedly about “alien contact”, is an inspired illustration of the human reaction to the magical and positive aspects of the unknown.  Visually brilliant, aurally inspired, and characteristically stunning throughout, I was hooked by the 5th note. (Thank you Mr. Spielberg, for among SO MANY THINGS, making films infused with wonderment and awe.)

STAR WARS (1977) – I was lucky enough to be introduced to this film as a 7 yr old boy opening night in Chicago by a rambunctious uncle.  I proceeded to see Star Wars in theatres thirty more times that year, and managed to see every sequel on opening day, all the way through till the last release of each shagging episode of the “prequels”.   Star Wars was my “gateway” film. (Thank you, Mr. Lucas, for blowing the doors off the movie making process!)

GREASE (1978) – One of the few soundtracks to which I can sing every song, every line, every note.  Travolta as Danny was absolutely the coolest, Newton-John as Sandy was so totally the hottest… This is by far one of the greatest “Guy meets Girl” movies, and perhaps the naughtiest “Family film” ever made.  Yay! (Thank You to Randal Kleiser, and one of the best ensemble casts EVER!)

HALLOWEEN (1978) – My first real Horror Film, and IMHO one of the scariest movies ever made.  I don’t care if he was wearing a painted “James T. Kirk” mask.  The original Michael Myers spooked me for years… and I loved it! (Thank you, John Carpenter, for scaring the living crap out of me, and for the theme song that still defines the holiday 32 yrs later!)

FLASH GORDON (1980) – Incredible Art Direction, Insane Costumes, Epically Campy Visual Effects, and QUEEN delivering one of the best soundtracks of all time… how could you NOT love this movie? (Thank you to Dino De Laurentiis, Mike Hodges, and Freddy Mercury for making the best damn Sci-Fi Rock Opera ever made.)

TRON (1982) – I was first in line opening day at the Virginia Theatre to see this film, and it so completely blew my mind I couldn’t sleep for the rest of the week… this is the film that changed the way I saw EVERYTHING, and got me into Computer Graphics. (And yes, I’m totally geeked about the upcoming “TRON: Legacy!”) (Thank You, Steven Lisberger, for loving Video Games and championing Computer Animation!)

CINEMA PARADISO (1988) – Because I’m a hopeless romantic who loves movies, so of course I loved watching a movie both about lovers and movies.  I’ll also forever be a sucker for a really good screen kiss, so there you go. (Thank you, Giuseppe Tornatore, for loving film so damn much you had to make a film about it.)

There are dozens of other  films that I could have included in this list,but I’ll save them for another installment down the road. For now, I have some celebrating to do…  so on my behalf, please have a fantastic Friday! 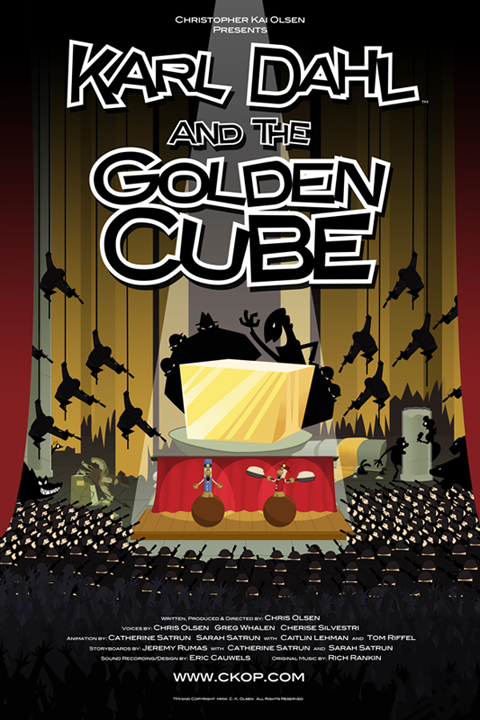 The “Karl Dahl and the Golden Cube” POSTER!